Pickup trucks need to provide unwavering reliability and rugged dependability, since many owners use them for both personal and professional transportation duties. Over the years, The Dodge Ram established itself as a capable compromise between a rugged work truck and a comfortable, civilized personal vehicle.

Through five generations and with almost 40 years of market presence, Ram has evolved from a simple and humble work truck to a king of luxury in the class of full-size pickup trucks. The basic formula used here is similar to ones used by close competitors. No matter which generation, you will always get a sturdy suspension, cab options that can accommodate two to five adults, a large cargo area and either rear wheel or all wheel drive option. Everything else was changing to keep up with current trends and market demands of the time.

Dodge introduced the first generation of Ram pickup trucks in 1981. Essentially, it was the final iteration of the D series, a truck whose origins dated back in the 60s. And this was its biggest downfall, despite the ruggedness and overall quality. The body was boxy and outdated, the interior equipped was scarce, while engines, both Slant straight six units and LA V8 ones, were almost a decade old. When compared to Ford and GM counterparts, the Ram was outgunned in all aspects. This reflected on sales figures, because the Ram wasn’t a popular option among buyers in the first several years of production. 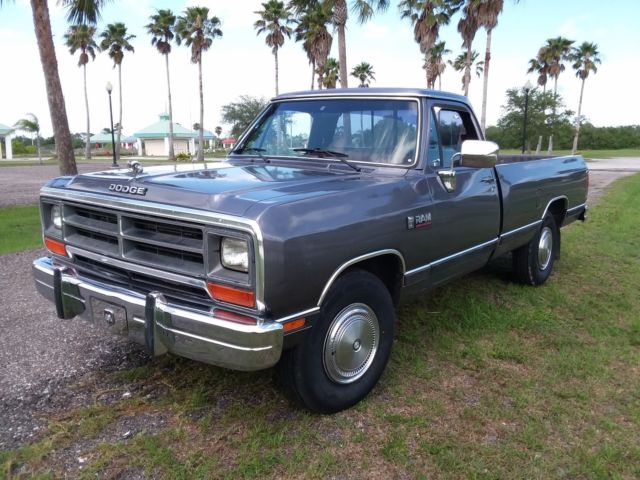 However, by 1989, Dodge’s unfavorable situation was about to change, as they introduced the new diesel engine. Although both Ford and GM offered diesel engines in their full-size pickup trucks for years, the Cummins unit used for Ram trucks was in a different league. With dependable reliability, simple design and plenty of torque, this 5.9 liter straight six was a game changer. Over night, Ram with Cummins engine became the favorite choice among contractors and farmers. This combined with updated comfort and safety features, such as ABS and fuel injection, helped increase sales volumes during final production years. At the turn of the decade, it was clear that Ram had a good market potential. It was up to Dodge to make the best of it.

With the second generation, Dodge was determined to tackle the biggest remaining problem, and that was the look and appearance. Moving away from the boring utilitarian look, the new Ram added some interesting visual features. According to Dodge, the inspiration for the new look came from the 50s Power Ram Wagon. The raised hood line, lowered fenders and placement of the headlights all give away the similarity.

Beneath the stylish hood, there were several engine choices. Standard options were Magnum V6 or bigger V8 engines. With revised cam profile, modified valve train and addition of sequential electronic fuel injection, these engines delivered more power and better low down torque. Being such a hit in the previous generation, the Cummins engine was the only logical choice for a diesel unit. It remained unchanged until 1998, when it got the modern 24 valve head. Rounding up the engine options, there was a massive V10 unit, being the most powerful gasoline engine available at that time. Engines were available either with a four-speed automatic or a five-speed manual transmission,

The suspension used an independent coil spring setup with anti-roll bar up front and leaf springs in the rear, with gas-charged shocks providing a good ride quality. Other features included driver and passenger airbags, rear abs as standard and optional power take-off.

Lastly, the interior was spacious, stylish, and well equipped. Things like comfortable and adjustable front seat, power locks and mirrors, cruise control and air conditioning gave this truck a civilized, car-like manners. It didn’t take long for buyers to recognize these upsides, and sales quadrupled in the first year alone, when 400.000 new Rams left the factory. This production pace continued for the next several years, only to decline around 2001.

In its efforts to keep up with strong competition and market demands, Dodge released the new third generation Ram during 2002. Design wise, this truck was an evolution of its predecessor, keeping features such as crosshair grille and truck style front end. The body was bigger and more massive, but thanks to various design tricks, it appeared sleeker and in touch with time. 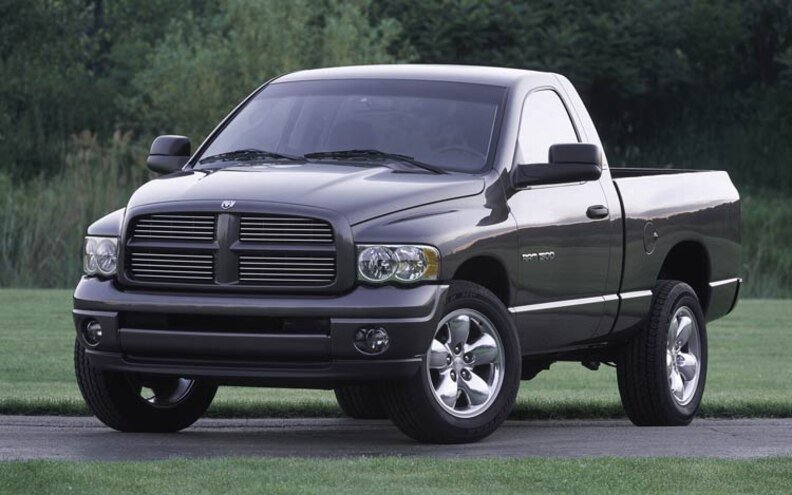 Still, the biggest improvements were inside the cabin and under the hood, boosting both luxury and performance. Features such as leather seats, power adjusting mirrors and automatic air conditioning stated that this was more than an ordinary work truck. And so did the engines. Besides standard V6 and V8 Magnum units, buyers could get a special SRT version equipped with a V10 engine from a Dodge Viper. As for the diesel engine, the trusted Cummins unit received several updates during the production run of the third gen. Most noticeable ones are the introduction of the common rail injection system in 2003, while in 2007 a newly designed 6.7 liter unit replaced the aging 5.9 liter engine.

During 2006, Ram received a major overhaul, covering both interior and exterior. This updated look followed the new design outlines caused by a Chrysler-Daimler merger. However, buyers didn’t seem to like the new appearance. As the sales figures declined, Dodge was forced to take action and speed up the development of the next generation.

With Ram’s fourth iteration in 2009, people at Dodge’s design department played safe. The basis for the design was the early third gen trucks, and both crosshair grille and sloping wheel arches were still there. However, the new truck had an aggressive appearance and more prominent body lines. And with optional chrome details, it was stylish and flashy. 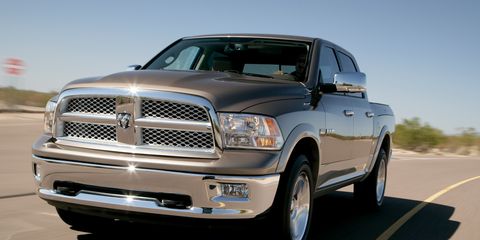 Because the previous generation had great engines, there were no revolutionary changes under the hood. Magnum V6 and V8 engines gave way to more modern PowerTech and Pentastar units, which offered better driving characteristics and fuel economy. And there was, two HEMI V8 engines and a 6.7 liter Cummins diesel, who all received various small updates over the years. The biggest news was the introduction of the smaller V6 diesel engine, called EcoDiesel. This engine aims at customers who wanted a fuel efficient truck but didn’t need the power and towing capabilities of a heavy duty Cummins engines. All engines come with either six or eight speed automatic or six speed manuals.

Unlike with previous generations, this time the biggest improvement was well hidden out of sight. Most full-size pickup trucks use leaf springs in the back. It is simple and durable, but it has a negative impact on the ride quality. Fourth gen Ram uses a multi-link rear suspension with coil springs that absorbs rough pavement rather than deflecting it. With this, the Ram rides more like an SUV than a traditional pickup. This was also the only truck to offer an active leveling air suspension on all four corners, features an access setting that drops ride height by 2 inches.

Inside the cab, there was a range of features intended to lure in more refined buyers.

Depending on the trim level, this Ram came fitted with premium options such as heated and ventilated front seats, Alpine audio system, power adjustable pedals and navigation system with an 8.4in touch display.

Introduced in 2019, the all-new Ram is very different compared to previous generations. It brings in a more sophisticated and bold design, while still keeping that traditional tough and aggressive appearance, which is important in this segment. Most noticeably, the signature grille and headlights layout gave way to a sleeker and more elegant arrangement.  Also, headlights are now available as standard halogen units and with integrated adaptive LEDs. 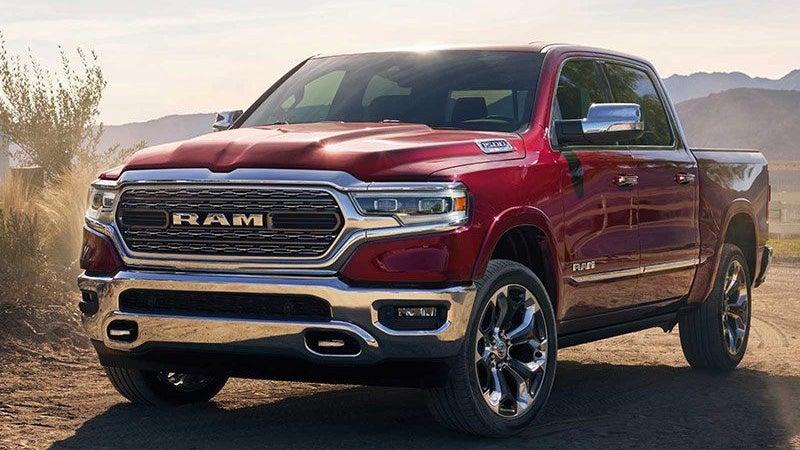 While its predecessors offered many and sometimes confusing engine options, the current Ram has a simple situation under the hood. The base option is a V6 Pentastar engine, followed with two HEMI V8 units and a well known 6.7 liter Cummins diesel. Both V6 and smaller HEM V8 are available in combination with “eTorque”, a mild hybrid system that improves torque and fuel economy. It is worth mentioning that Cummins unit is now delivering 1000 lb-ft of torque, making Ram the first truck to break this barrier. Dodge announced that later during production, a redesigned V6 EcoDiesel will be available.

The interior is bigger and better shaped in terms of comfort, with buttons and knobs placed well within reach. Depending on the trim level, you can expect the finest materials, an audio system made by Alpine or Harman/Kardon with up to 18 speakers and a 12in touch screen display. Abundance of storage compartments helps keep the interior clean.

Other notable upgrades include a redesigned frame made from high strength steel and various aluminum parts. This helped increase structural rigidity and reduce overall weight. With all this, the new Ram keeps up with all current trends in touch while keeping tough workman personality.

We'll send you a quick email when a new Dodge RAM document is added.