If you want an affordable, practical and economical car, chances are you’ll probably end up with a Toyota Corolla. It’s one of the best-selling cars of all time, a car which shaped the very automotive world we live in today. Very few cars have influenced the automotive industry as much as the Toyota Corolla has. Now in its twelfth generation, the new Corolla is a far cry from the original model which hit the showroom back in the mid-1960s, but it’s still got some of the essence which made the first Corolla so great. Here’s a quick look at the Corolla’s vast history and the different generations, as well as what made each of them outperform and outsell most of their rivals. 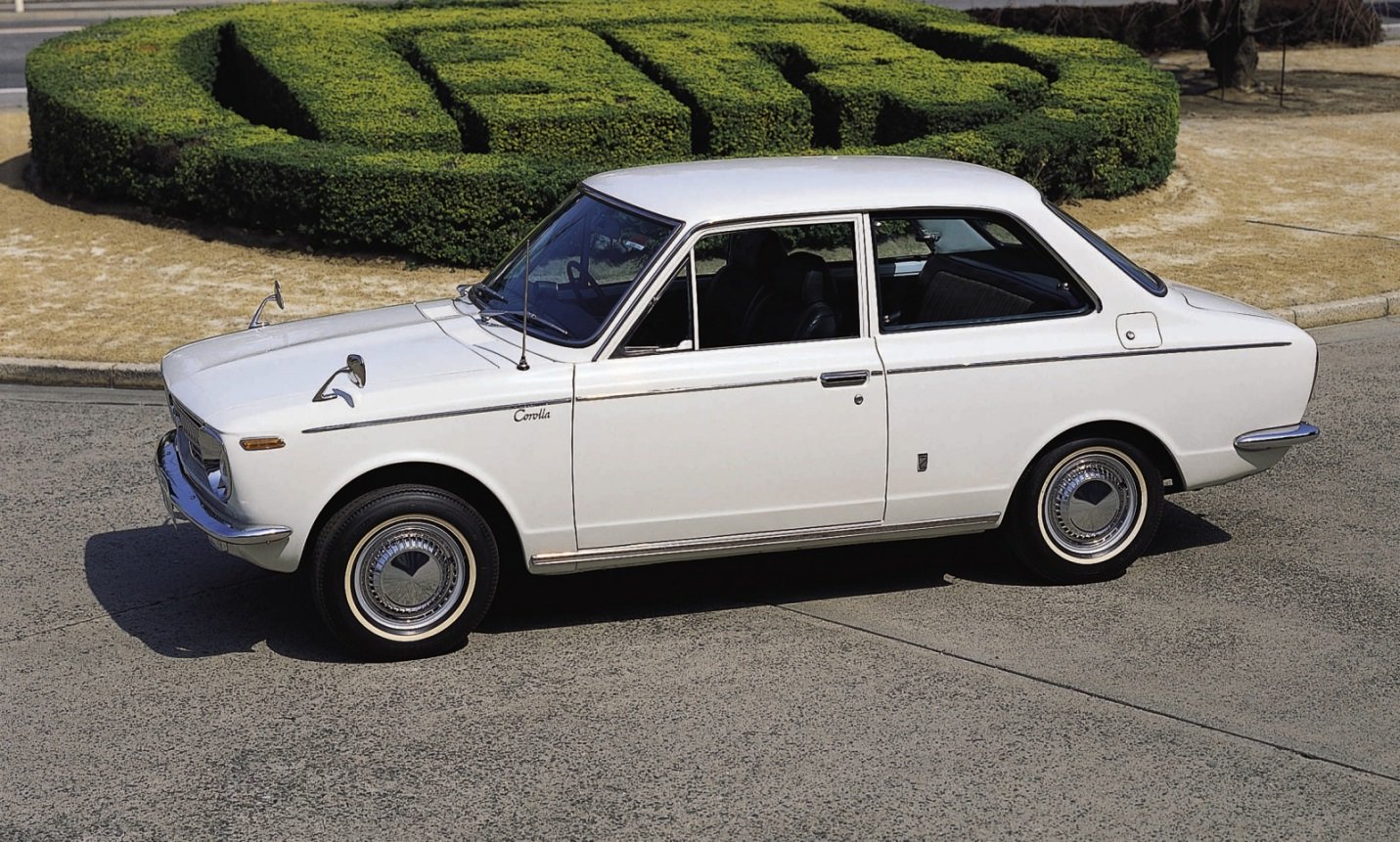 The Corolla was an overnight success. Its stand-out features made it an international best-seller. North American variants came with either a 1.1-liter or a 1.2-liter four-cylinder engine, making 60 and 65 horsepower respectively. What made the Corolla so special, however, was its selling price. Coming in at $1,700, it was one of the most affordable cars in its segment, but it was much better equipped and far more reliable than all of its competitors. 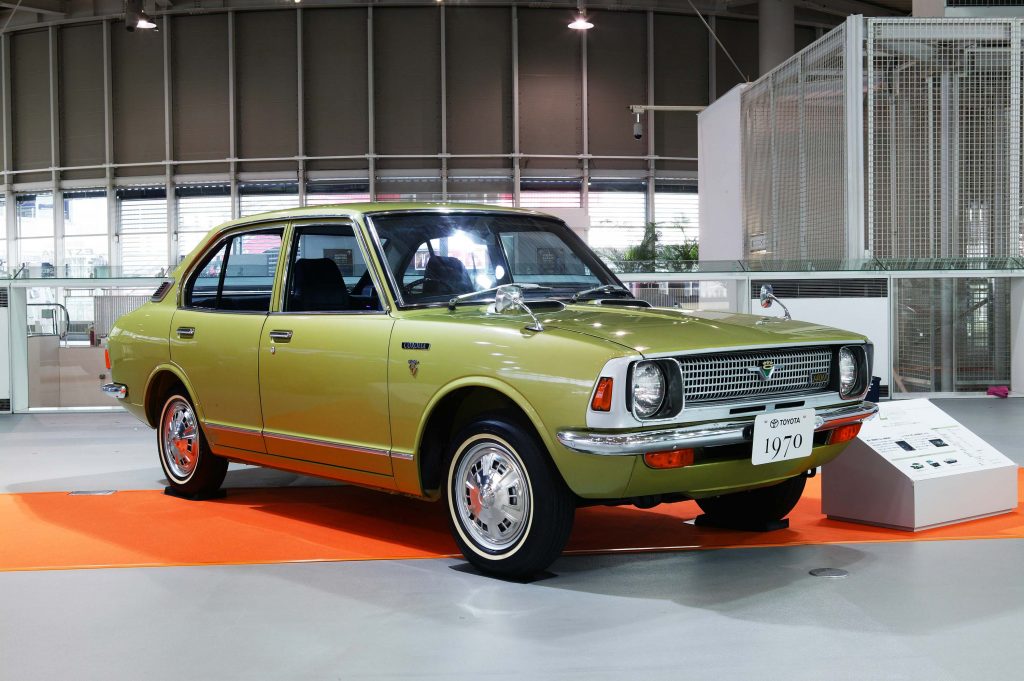 Toyota decided to roll out a brand-new Corolla in 1970, just four short years after the first-generation made its debut. This would set the precedent for how the Corolla story unfolded for years to come. From here on out, Toyota would roll out a new generation every four years, and introduce a major facelift every two years.
The second-gen car, also known as the E20, featured improved front suspension design for better handling, but also a slightly longer wheelbase for greater comfort. The 1.1-liter engine got the ax, but Toyota decided to retain the 1.2-liter unit with some modifications. They also introduced a 1.6-liter four-cylinder with 102 horsepower, to meet the demands of an ever-growing power-hungry audience.

Toyota also introduced a brand-new body variant in the form of a two-door coupe, known as the S5 and SR5 (a lot of you might know it as the Levin, its Japanese name). The second-gen SR5 was also the first time Toyota decided to shoehorn a bigger and more powerful double overhead camshaft (DOHC) engine donated from a larger model into the Corolla. The E20 Corolla was the second best-selling car worldwide the year of its debut. 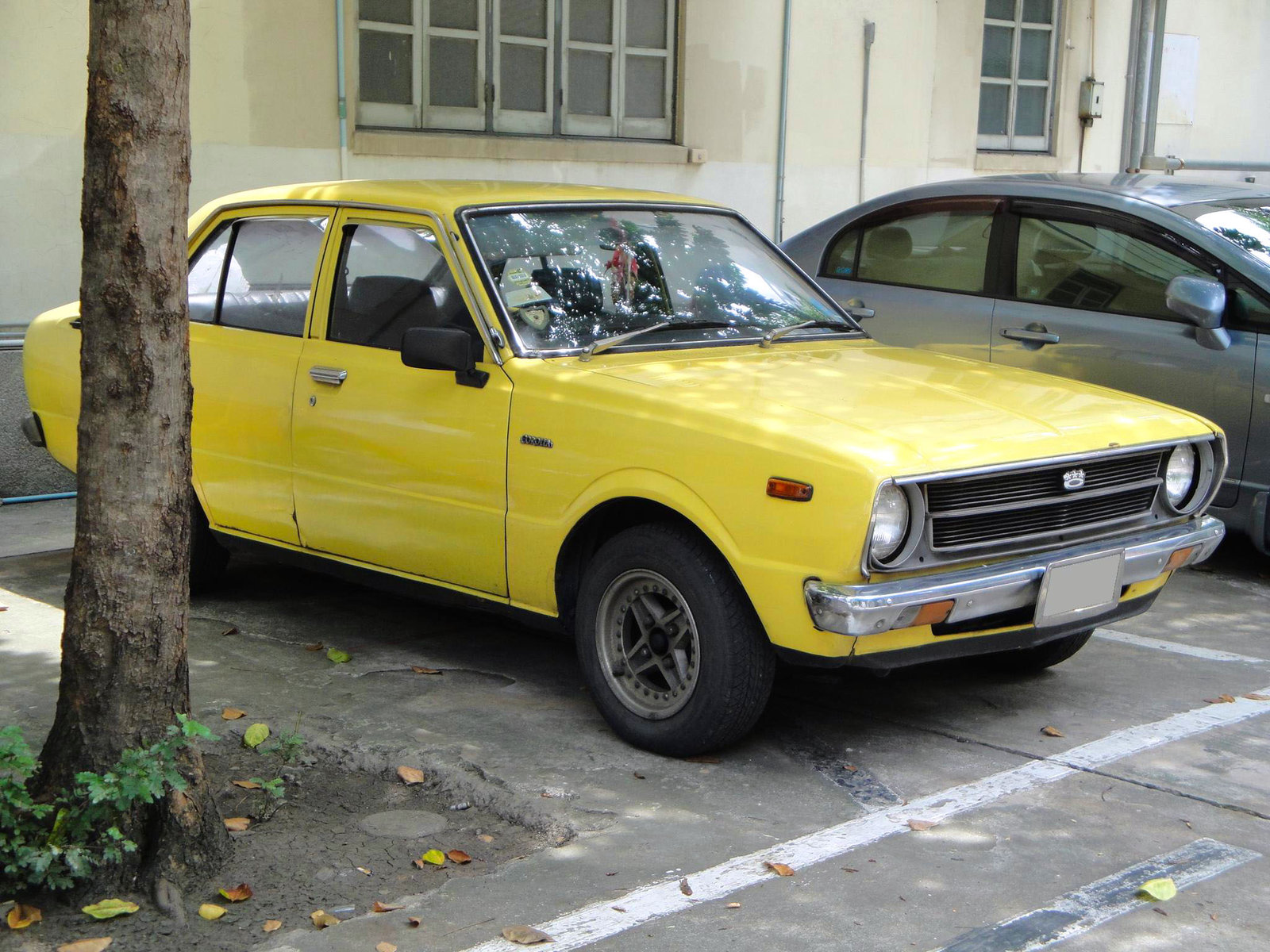 By the time the third-generation model rolled out in 1974, Toyota had already established what they wanted to do with the Corolla and how they were going to position it on the market. They made it more robust, with sharper lines and more aggressive styling. As a result, sales were underwhelming in Japan, but the car sold in record-breaking numbers here in the States.

In the wake of the fuel crisis in the United States, Toyota’s decision to stick with small-capacity engines and further refine their engine technology paid off massively. The third-gen Corolla, now sporting E30 and E50 monikers, was initially offered with 1.2-liter and 1.6-liter engines, producing 55 and 75 horsepower respectively. It also came with a choice of a four or five-speed manual, as well as a 2/3-speed automatic, depending on the engine and trim. 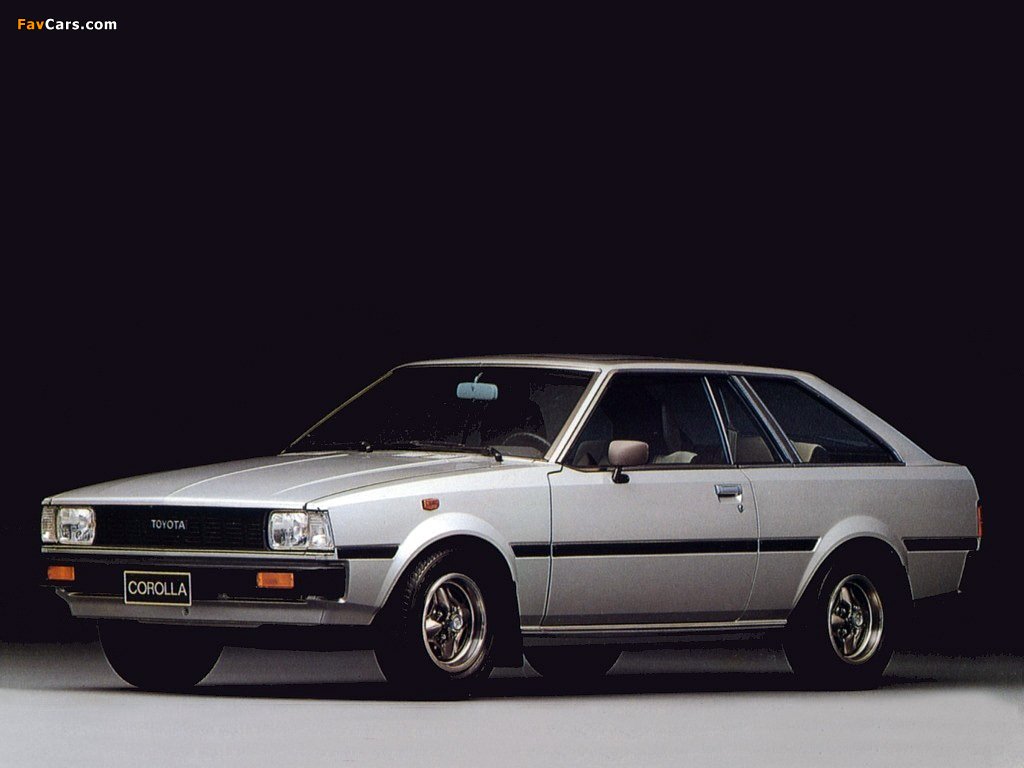 With the introduction of the fourth-gen E70 Corolla, Toyota also introduced some of the most drastic and noticeable design changes to their best-selling model. They simplified the design of the Corolla, making it a lot more square and boxy. As emission regulations grew stricter by the year, Toyota had to get rid of the old ‘K’ branded engines, and introduce the new and more-efficient ‘T’ and ‘A’ series engines. The bigger 1.8-liter ‘3T’ produced 75 horsepower, but weirdly, people preferred the 1.6-liter ‘4A’ engine, probably because despite being smaller, it made an extra 15 horsepower (90 hp).

Other changes included a brand-new rack and pinion-type steering which offered more feedback, as well as modern rear coil spring five-link setup. The end result spoke for itself. By March of 1983, Toyota had sold well over 10 million Corollas worldwide. 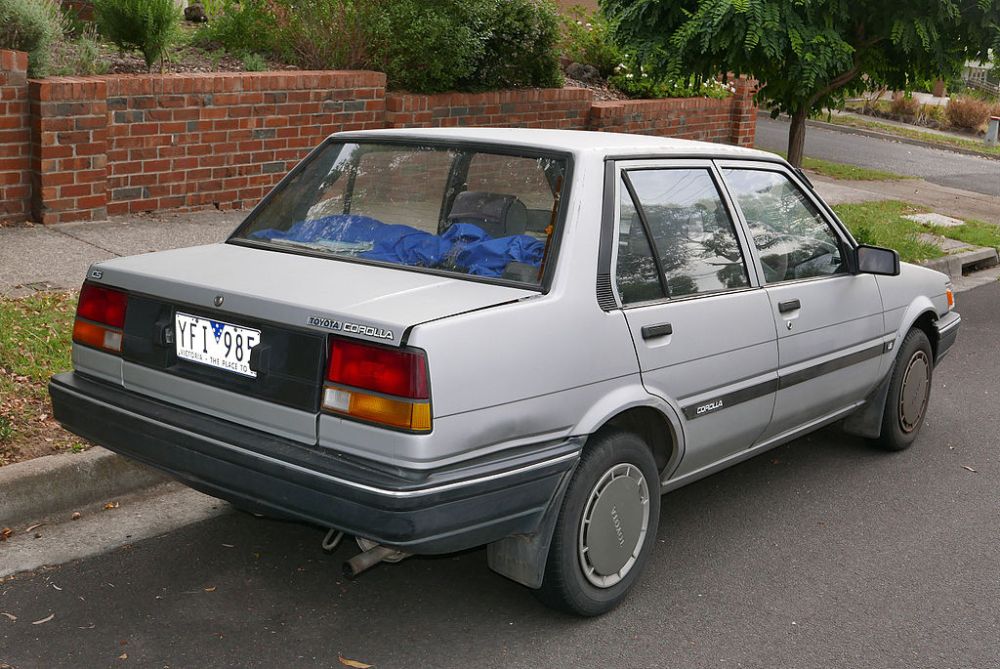 With the 80s in full swing and the Corolla doing better than ever, Toyota introduced the new E80 variant in 1983, and to no one’s surprise, they made it even boxier. Toyota expected the E80 to sell well, but even they couldn’t imagine what was to come next. The E80 Corolla is widely regarded as one of the most popular Corollas to date, as some 3.3 million units found their way off of Toyota’s production line.

The fifth-generation Corolla also spawned what might be the purest sports car, in every sense of the word, to date: the legendary rear-wheel drive AE86. Unsurprisingly, most Corolla sales in the US consisted of the AE92 FWD sedan. The 4A-C engine found in the fifth-gen Corolla was available in two variants: a carbureted one developing 90 horsepower, and a fuel-injected model producing 112 horsepower in the form of the 4A-GE. 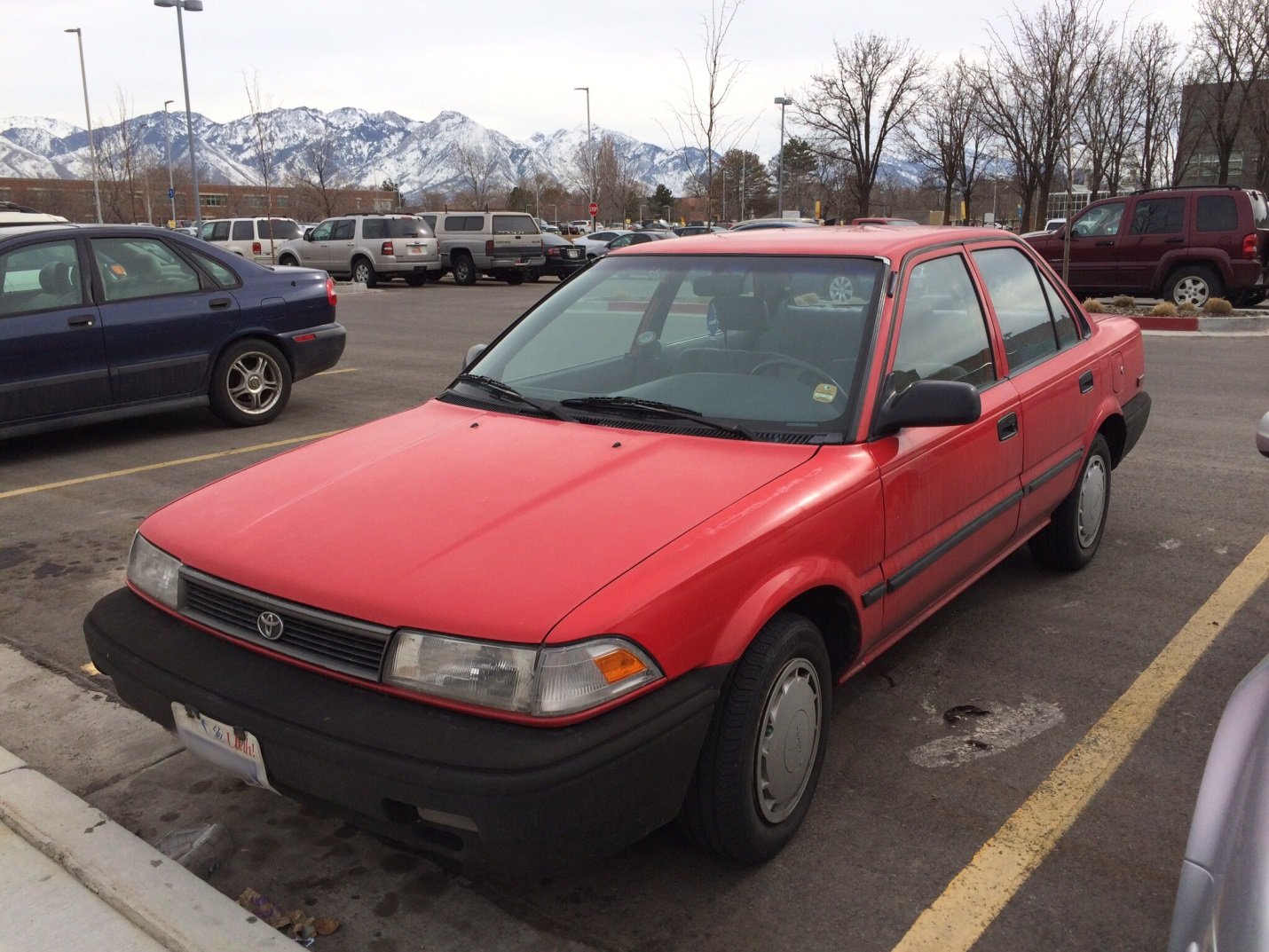 With the sixth-generation Corolla (E90), Toyota decided to go for a more contemporary design, one which wasn’t as boxy and square as the E80. With the E90, Toyota got rid of the rear-wheel drive variants such as the AE86, making the model essentially an FF platform. In a joint venture between GM and Toyota, they decided to rebadge the Corolla and sell it under the Geo Prizm nameplate.

The North American engine range consisted of three different 1.6-liter units: a carbureted DOHC powerplant making 85 horsepower, a fuel-injected narrow valve guide one producing 102 horsepower, and a fuel-injected wide valve angle unit pushing out 115 horsepower or 135 horsepower in GT-S trim. Although most Corollas of this generation were front-wheel drive, Toyota did offer the four-wheel drive All-trac wagon in both Base and SR5 trim level from 1988 to 1992. They’re extremely rare though and are virtually indistinguishable from AE92 sedan variants apart from larger tires.

By the time the E100 Corolla made its debut in 1992, the once sub-compact hatch had grown in size substantially. With a 97 inch wheelbase, it now occupied the space once held by the Corona and the Toyota Camry, having moved up to the compact size class. Once again, Toyota decided to go with a much more elegant and curvy exterior, getting rid of the boxy styling found on the E80.

In North America, the Corolla was offered with two different engines: a 1.6-liter 4A-FE and a 1.8-liter 7A-FE inline four-cylinder. Both engines were further available in two different trim variants, but power was broadly similar across the entire engine lineup, ranging from 100 to 115 horsepower. By the end of 1997, the Corolla had become the best-selling car in history, surpassing even the VW Beetle. 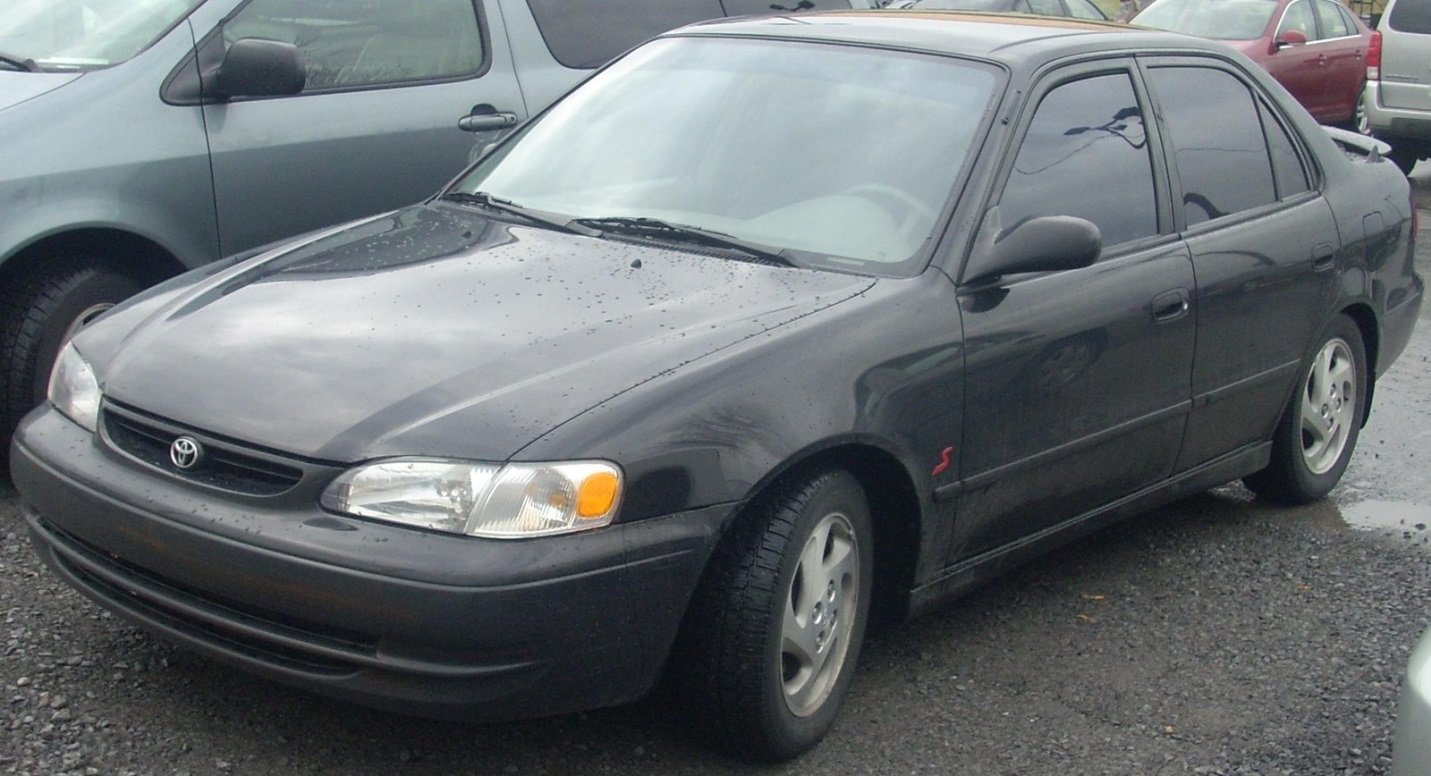 The eight-gen E110 Corolla made its debut in 1995, but its launch in North America was delayed until mid-1997. Although it wasn’t fundamentally different from the E100 which preceded it, Toyota did decide to give the North American E110 Corolla a different styling compared to the car found in the rest of the world.

Built in either Cambridge, Ontario, or Fremont, California, the E110 was only offered as a four-door compactsedan. All Corollas were powered by a 1.8-liter 1ZZ-FE powerplant, making 120 to 125 horsepower depending on whether the engine was equipped with Toyota’s VVT-i technology. It was also the first time in the Corolla’s history that the engine used a timing chain instead of a timing belt. Base models came equipped with either a 3-speed automatic or 5-speed manual transmission, but midrange and luxury trims were also available with the smoother four-speed auto. 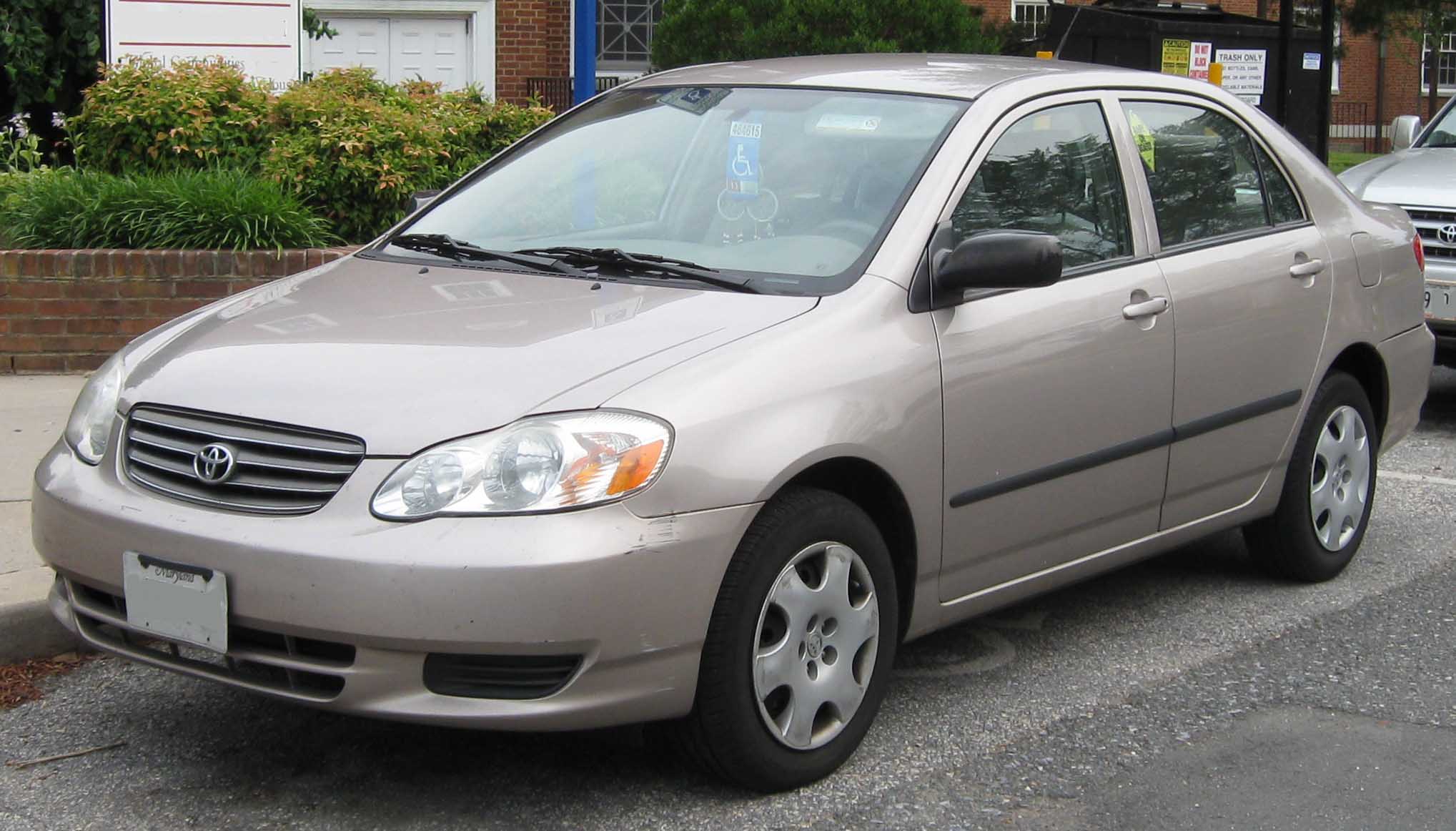 The ninth-gen E120 Corolla saw the light of day in 2000, but it wasn’t until 2002 that we got it here in the United States. Compared to the rest of the world, the E120 destined for North America featured a different styling, as well as a bigger, more practical body. It was based on the Corolla Altis, a model which was distributed across Southeast Asia.

The 1ZZ-FE engine was essentially a carry-over from the E110, except Toyota decided to bump up the power to 130 horsepower. However, they also introduced a sporty XRS model in 2005, carrying a much more powerful 1.8-liter 2ZZ-GE engine and pushing out 170 horsepower. The 2ZZ-GE was built in collaboration with Yamaha motors and revs to 8,200 rpm, a significant redline for a Corolla. 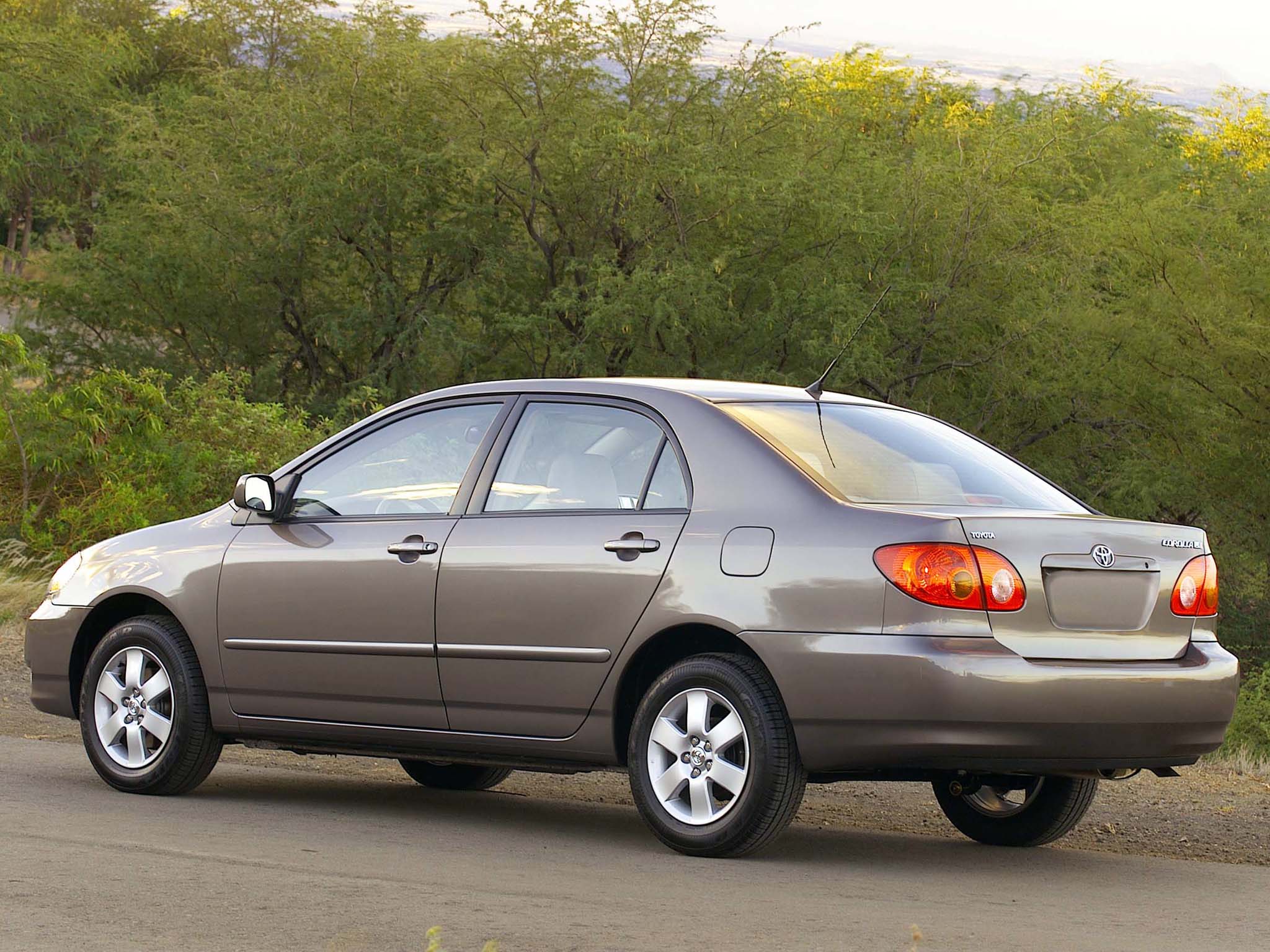 Toyota revealed the E140 Corolla in 2006, some forty years after the Corolla was first conceived. To satisfy ever-increasing needs from its customers, Toyota threw everything they had at the E140. It was a brand-new car both inside and out. It took a lot of styling cues from its bigger brother, the Camry, but it also kept some similarities with the Toyota Yaris. Overall, it was designed to be the perfect car for everyone, whether you needed a daily driver or a family hauler.

Toyota also introduced a slew of new technology features in E140, including an auxiliary audio jack for MP3 players, upgraded JBL audio, as well as hands-free Bluetooth mobile system. With the facelift in 2011, Toyota also included a new audio system with a USB port, Bluetooth, and supporting steering audio controls for said upgrades. 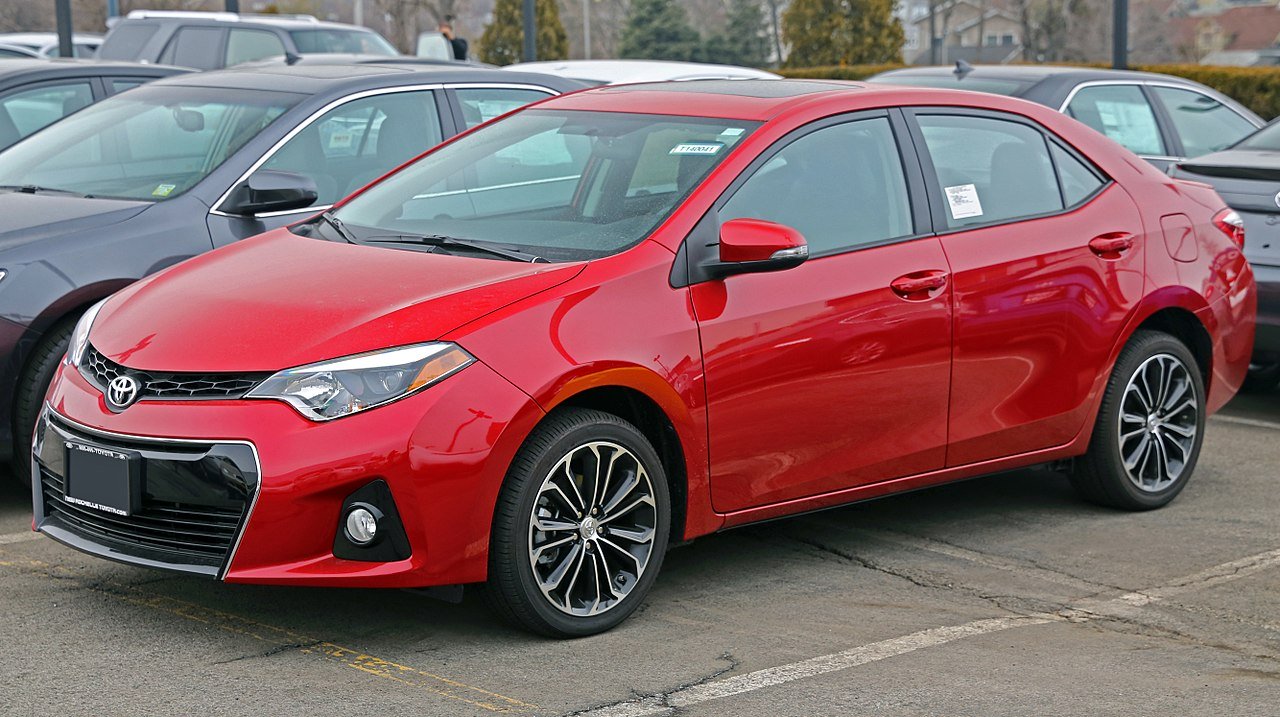 Although Toyota unveiled the E160 Corolla in 2012, it was only offered in Japan. International markets, including North America, had to wait until 2013 when the much bigger E170 model arrived. Apart from some minor visual changes, the North American version is similar to the International one. That being said, it didn’t come with diesel engines in the United States, leaving customers with a choice between two different gasoline engines. The familiar 2ZR-FE with 132 horsepower is essentially a crossover from the previous generation, but the 2ZR-FAE with 140 horsepower introduced a significant update in the form of Valvematic.

Available with a four-speed auto and a six-speed manual, the E170 also marked the first time Toyota added their constantly-variable transmission (CVT) to the North American Corolla lineup. In July of 2013, Toyota had officially sold over 40 million examples of the Corolla, achieving something no other manufacturer has managed to accomplish. 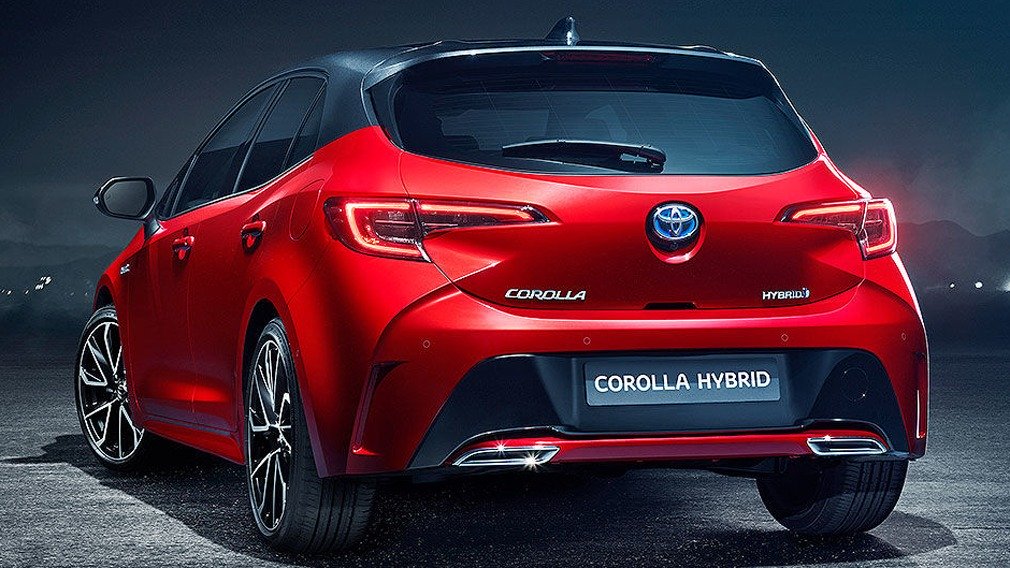 With the E210 Corolla introduced in 2018, Toyota decided to completely revamp their most popular model and give it a new life. Because it’s based on their new Toyota New Global Architecture (TNGA) platform, it’s basically an all-new car with no connection to the E170. Originally introduced as a hatchback in the United States, the Corolla went on sale in late 2018 equipped with a 2.0-liter Dynamic Force engine making 169 horsepower. It’s available with either a 6-speed manual or a CVT transmission.

In early 2019, Toyota added the Corolla sedan to its lineup, as well as a brand-new engine. The 1.8-liter 2ZR-FAE with 139 horsepower made an appearance, and so did the 2ZR-FXE, an engine in the hybrid variant of the Corolla with 121 horsepower and a CVT transmission only. At the moment, estimates state that Toyota is selling over 1,000 Corollas every day in the United States. Or, in other words, over 40 Corollas an hour.

We'll send you a quick email when a new Toyota Corolla document is added.